DISCUSSION ON IDEOLOGIES OF GANDHI AND NEHRU AT JKK

HomePress ReleaseDISCUSSION ON IDEOLOGIES OF GANDHI AND NEHRU AT JKK 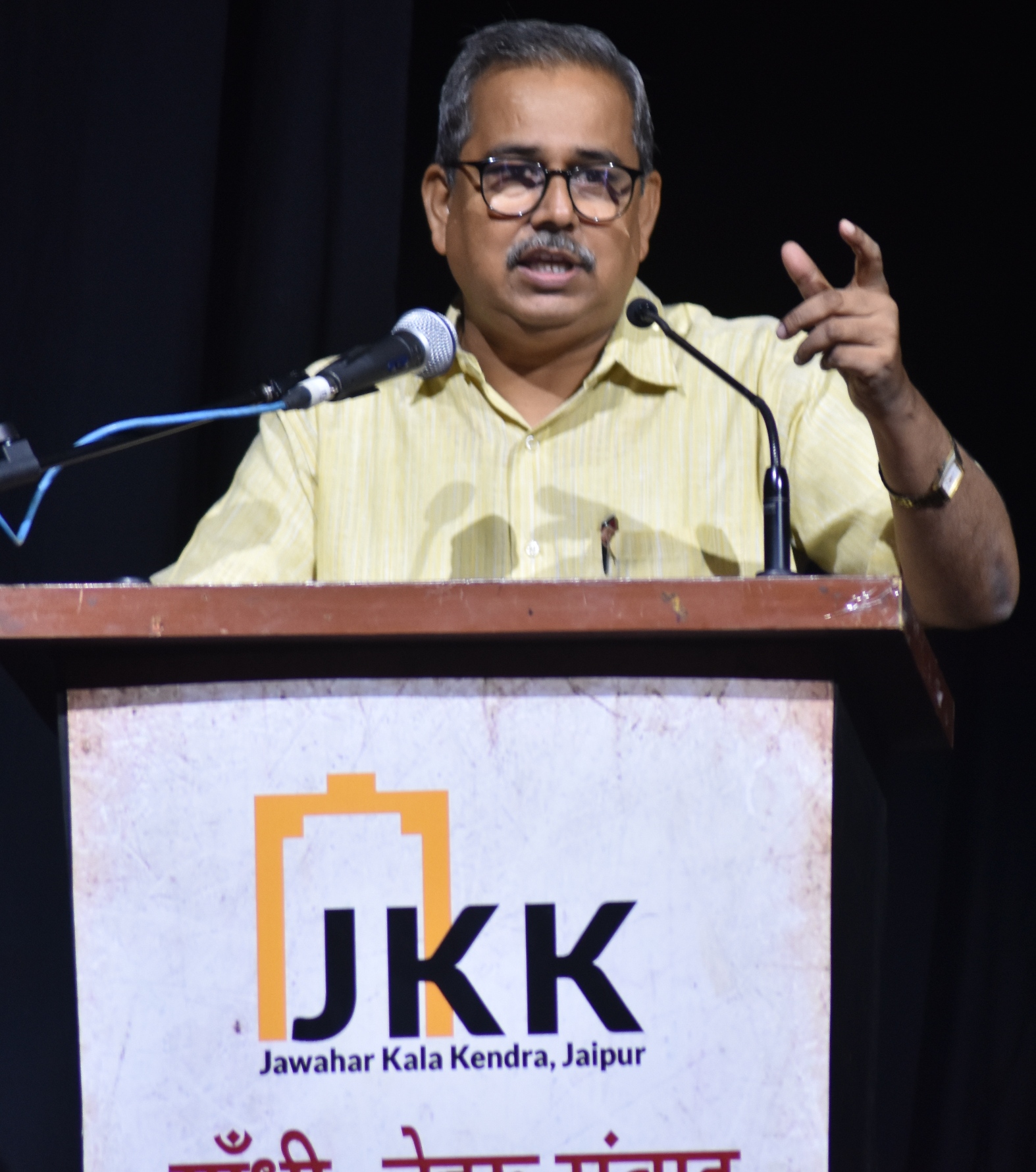 DISCUSSION ON IDEOLOGIES OF GANDHI AND NEHRU AT JKK

As a part of its literary activities, Jawahar Kala Kendra (JKK) organized a day-long seminar, ‘Gandhi Nehru Samvad’ on Friday, 9 August at Rangayan. The famous Hindi writer and critic, Professor Purushottam Agarwal and famous writer and social scientist, Dr. Alok Srivastava were the speakers at the seminar. The seminar was moderated by the well-known Hindi writer of Rajasthan, Dr. Durga Prasad Agarwal.  The ADG, JKK, Mr. Furqan Khan was also present on the occasion.

The seminar began with Dr. Alok Srivastava sharing his views on Gandhi. He told that rumours about the differences between Gandhi and Bhagat Singh, Subhash Chandra Bose and Ambedkar are not completely true. They might have had different opinions but they always respected each other.He said that Gandhi’s idea of ‘Ahimsa’ (non-violence) played a huge role in the Freedom Movement. It brought together people across class, caste and gender and thus, served as the binding force of the diverse nation that India is. Referring to the ‘White Man’s Burden’ — a phrase used by the British to justify European imperialism in the nineteenth and early twentieth centuries, Dr. Srivastava said that ‘Ahimsa’ was such a strong and superior force that it also put the British in a spot. However, Gandhi’s failure to secure commutation of Bhagat Singh’s execution has provided his critics a convenient weapon to attack him. He has been accused of making half-hearted attempt to stop the execution, added Dr. Srivastava. He further said that even though Gandhi did not support revolutionary violence, he tried his best to save the lives of Bhagat Singh, Rajguru and Sukhdev. Similarly, even though Gandhi and Bose believed in different means to achieve independence, Gandhi had immense respect for Bose. Gandhi called Bose “The Prince among the patriots” and one whose “patriotism was second to none”. In 1932, Mahatma Gandhi went on a hunger strike in his objection to the provision of separate electorates for the Dalits, as suggested by BR Ambedkar. By the Poona Pact of September 24 1932, Gandhi and Ambedkar signed an agreement for reservation of Dalits in provincial legislature, instead of separate electorates. Dr. Srivastava concluded that even though differences in ideology existed between Gandhi and his contemporaries as well as the country people, there is no denying that Gandhi was the most popular public leader.

In the second session of the seminar, Dr. Purushottam Agarwal addressed the audience on the topic of ideological differences and similarities between Gandhi and Nehru. He referred to the correspondence between Mahatma Gandhi and Pandit Jawaharlal Nehru in 1945, a few years before India gained independence. In the letters, Mahatma Gandhi expressed concern about differences between Nehru and himself in their ideas on India as an independent nationbut it both of them surely wanted prosperity of the nation in a democratic way.Dr. Agarwal also pointed out that Nehru believed that Gandhi’s biggest contribution was not that he led the freedom movement but that he set an example for the leaders of the world that “ethics” should be the basis of politics.

Dr. Agarwal also referred to his latest book ‘Who Is Bharat Mata?’ which contains selections from Nehru’s classic books—An Autobiography, Glimpses of World History and The Discovery of India; his speeches, essays and letters from the pre- and post-Independence years; and some of his most revealing interviews. Dr. Agarwal said that Nehru was not just a political leader but also a remarkable man of ideas and action who had an instinctive understanding of India’s civilizational spirit.  He said that Gandhi and Nehru had different opinions over many issues but they had immense respect for each other and used to discuss their differences openly in the letters. Gandhi had clearly declared Nehru as his successor. Their legacy, according to Dr. Agarwal, continues to be extremely relevant. One cannot rely on knowledge gained from forwarded whatsapp messages and thus one  should develop the habit of reading. According to Nehru, what counted as Bharat Mata were the people of India who were spread all over this vast land, said Dr. Agarwal. Both the sessions were followed by a Q&A round with the audience.