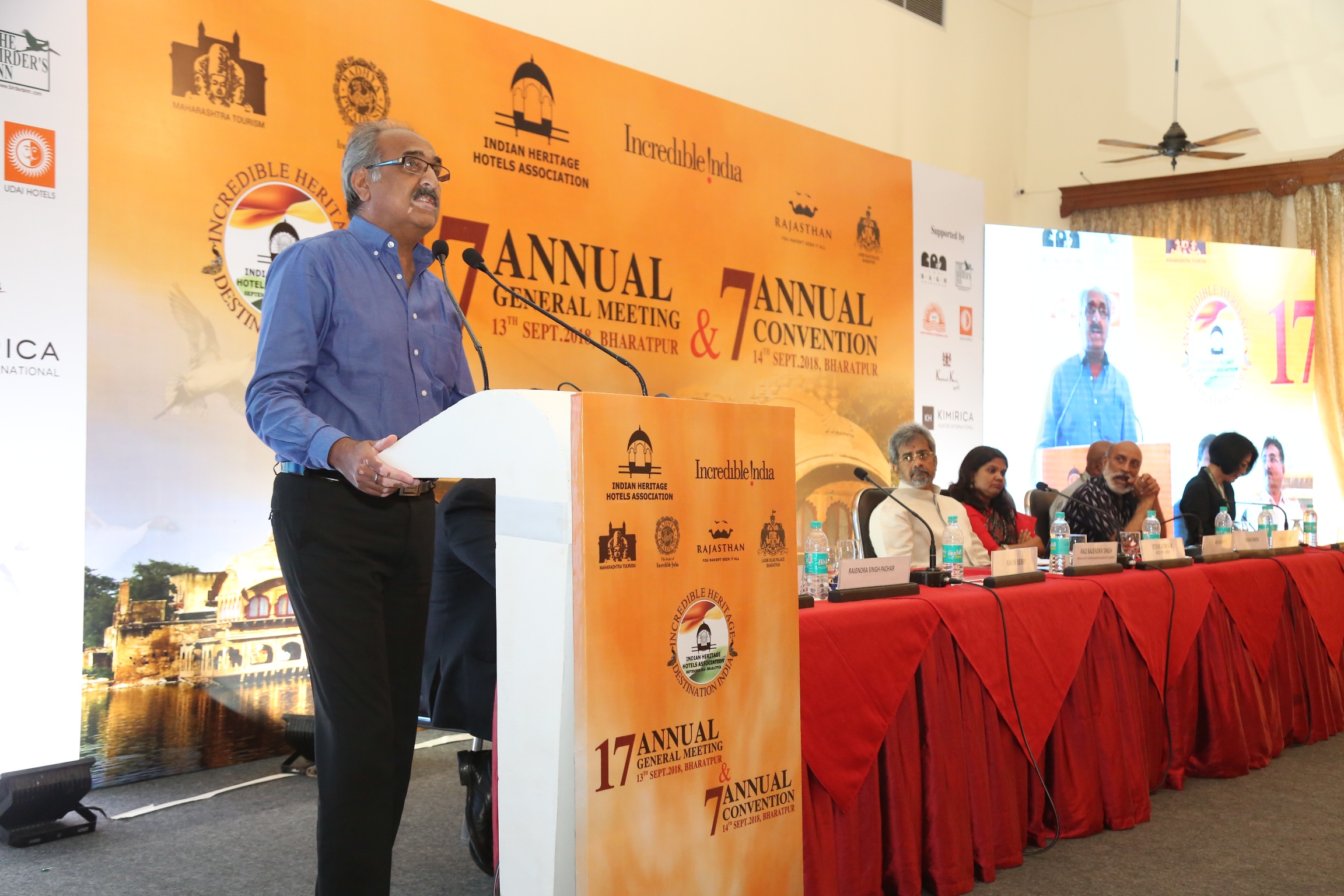 Rajasthan has an available working force of 2.98 crores. However, out of 100 jobs made available, only 48 positions will be filled. This is mainly because of the simple principle that the system of creating employment depends on human dignity. The hospitality industry ensures dignified job opportunities for the available working force. During the 16th and 17th century India had a very robust economy, the annual revenue of Akbar treasury had 17.5 million pounds and Aurangzeb’s had 100 million pounds. Modern India needs to learn from those times. One must also realise that the austerity of human value is based on what you can deliver and not what you can take. This was informed by Deputy Speaker, Rajasthan Legislative Assembly, Mr. Rao Rajendra Singh. He was speaking on the second day of the 7th Annual Convention of the Indian Heritage Hotels Association (IHHA) held in Laxmi Vilas Palace in Bharatpur on Friday.

President, IHHA Maharaja Gaj Singh of Jodhpur said that protecting the built heritage and conserving the local traditional and cultural values of communities for future generations is a must for sustainable development. The industry needs to continuously innovate keeping in mind the architecture and historically significant features of heritage properties to generate new activities for the tourists.

Discussions were also held on this year’s theme of ‘Reinventing India as a Heritage Destination’. Introducing the theme of the Convention, Conference Chairman and Honorary Vice President IHHA, Mr. Steve Borgia said that we must realise that our heritage is in danger. Without heritage, there will be no tourism and no stories left to tell the visitors.

Co-Founder and Chair of Neemrana Hotels, Mr. Aman Nath contended that it is the Government vision and the citizens’ aspirations that need reinventing not the country as the destination. Hoteliers should create an experience which is so unique that it remains with the people throughout their lives. He also stated 9 emotions that are imperative for heritage tourism – love, joy, wonder, sadness, courage, anger, peace, disgust and fear.

Head/Chair at Australian Museums/ AUSHERITAGE, Mr. Vinod Daniel highlighted global approaches in managing heritage – both tangible and intangible. He also threw light on several best practice examples both on national and state level. Placing emphasis on curating a well-devised strategy, he said that the plan needs to be implemented over several political cycles.

Author of Destination India, International Tourism Consultant, Mr. Navin Berry said that over the decades the understanding of tourism has dramatically enlarged and has transformed into a completely different entity. From sightseeing, it has expanded to cover a much wider gamut of activities – new age drivers. It encompasses weddings, MICE, experiential tourism, among others. While travel has become a hassle-free exercise owing to technology, the tourism industry itself has been found reluctant in chasing these new streams.

In her presentation, Director, Preservation of Sites and Monuments- National Heritage Board, Singapore, Ms. Jean Wee shared some of Singapore’s experiences as well as reflections on how some projects from around the world have achieved success. She said that often heritage preservation brings out the worst in everyone as it starts with a major difference in opinion. However, preservation must be a shared pre-occupation. It should offer all stakeholders a value proposition for commitment, participation and support.

Director, Department of Archaeology and Museums, Government of Telangana, Ms. N.R. Visalatchy outlined the efforts being made for preservation and excavation of monuments in the State.

Earlier an interesting session was held on how the spouses should contribute in the running of the heritage hotels. Thoughts like a lady’s selfless service and efficiency in running the house and a man may make a luxurious hotel but it becomes a home only with the pivotal contribution of women, among others were discussed. The session also stressed on the evolution of the role of women from just housekeeping and kitchen to managing marketing as well as finance.

A coffee table book on the heritage hotels was also released on the occasion.