“CIVIL SERVICES IS AT A CRITICAL JUNCTURE TODAY” -Aruna Roy 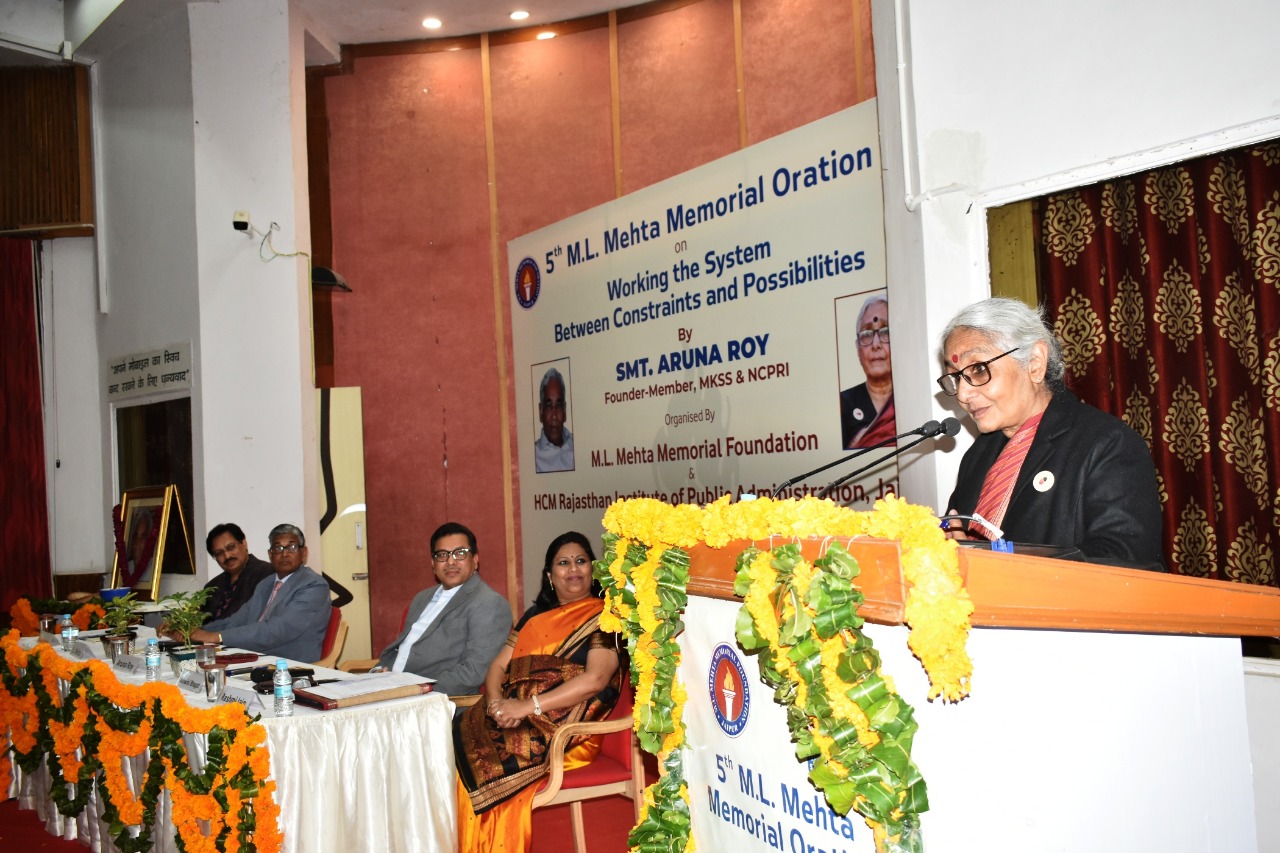 “CIVIL SERVICES IS AT A CRITICAL JUNCTURE TODAY” -Aruna Roy

Founder-Member of the Mazdoor Kisan Shakti Sangathan (MKSS) and the National Campaign for People’s Right to Information (NCPRI), Ms. Aruna Roy asserted that the civil service is at a critical juncture. On one hand, the level of aspiration to civil service is not on the decline, yet IAS officers have resigned from the service clearly stating that their reasons for resignation arise out of the violation of constitutional guarantees by the Government. She was speaking at the 5th ML Mehta Oration at B.S. Mehta Auditorium, HCM RIPA (OTS). She delivered a lecture on ‘Working the System: Between constraints and Possibilities.’

Ms. Roy further said that there have also been many lateral entries into the civil service and there are discussions afoot that the structure of the UPSC itself will be changed, reducing its independence. She further noted that it was an opportune moment to remember M.L. Mehta, especially at a public forum, to discuss what many perceive as a period of crisis with the idea of permanent civil service. M.L. Mehta worked steadily to establish the conventional, permanent civil service in the realm of development, and expanding its boundaries to include NGOs, comes at a crucial juncture. She concluded the oration by suggesting that it would be wise to once again publicly re-examine the importance of permanent civil service and its importance in today’s context.

In her speech, Aruna Roy spoke about how M.L. Mehta was an important part of the politics of Rajasthan’s development and its relationship with the people outside the civil service. He behaved with camaraderie and a sense of equality with people from all walks of life. This endeared him to many and established a tradition which has lasted many years. He had an ability to encourage the engagement of civil society actors with the issues of government. He was also a mentor for many in the IAS, who looked up to him for support and timely guidance. He was full of energy and reached out not only in conceptual terms but also in a physical sense with those all over the State.

M.L. Mehta understood the value of listening to people, as a very enthusiastic and always had an idea in his head. He primarily thought within the structure of the civil service and governance to address the conditions of the most marginalised. He fashioned schemes quickly and with great attention to detail. He will be remembered for a long time to come as someone who thought of Gandhi’s ‘Last Man’ circumscribed by bureaucratic necessities and political control.