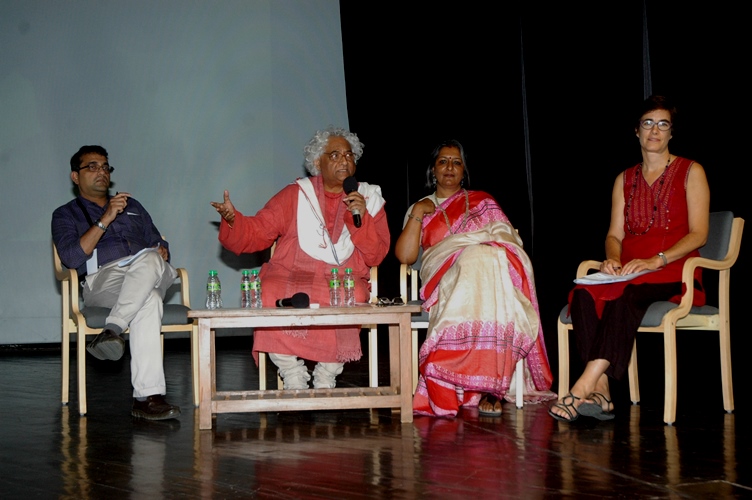 Aimed at discussing the critical and scholarly discourse around clay art in India, a 2-day symposium began at Jawahar Kala Kendra (JKK) on Saturday (1 September). The symposium was held as a part of the first Indian Ceramics Triennale ‘Breaking Ground’. The event was organized in collaboration with the Contemporary Clay Foundation.

Explaining the larger tradition of clay practitioners, Mr. Sardesai said the clay practitioners have been largely engaged in crafting repetitive designs which are functional and adaptive. How would one appreciate the creative outputs of non-exhibiting artists. Mr. Sethi touched upon the challenges faced by the clay community with emerging plastic alternatives such as plastic cups replacing kullads, potter of Bishnugarh making ashtrays as well as Chine Mati toys.

Ms. Palchoudhuri said that there is a gap between the artisanal produce and the needs of the society. The artisan is producing for a market they do not understand. The tension between traditional and modern continues to grow. Changing materials presents a challenge to tradition such as the use of adhesives, synthetic paints, glossy polyester cloths and Styrofoam embellishments.

Evaluating the language of clay in a larger context of art and architecture, Ms. Adajania said that today’s artists are surrounded are surrounded by rampant commercialism and plagued by endless labour. Referencing the works of Madhvi Subrahmanian, Sahej Rahal and Edmund de Waal, Ms. Adajania explored timeliness, post-apocalyptic time and deep time.

Speaking about material, space and processes, Mr. Kaufmann said that artists need to stand by their creations and the world will follow. Artwork begins with intuition and emotion so, it is wrong to question an artist about his concept. Ms. Malone mapped her journey in clay, her methodology, inspirations and thought processes. She said that creativity isn’t for everyone, one must own it.

The evening concluded with film screenings for the visitors. The screenings began with Keith Brimmer Jones’ (UK) – Rolling Clay with Keith, Clap along with Keith and Keith Encounter. This was followed by Rajula Shah’s (India) Katha Loknath and Tan Hongyu’s (China) Shifu.

On Subday (2 September) there will be sessions – ‘Material Matters’ and Closing ‘All Our Tomorrows’ at Rangayan from 10 am to 1 pm. This will be followed by book launch of ‘Building with Fire’ by Raj Meeker at Krishnayan at 4.30 pm.