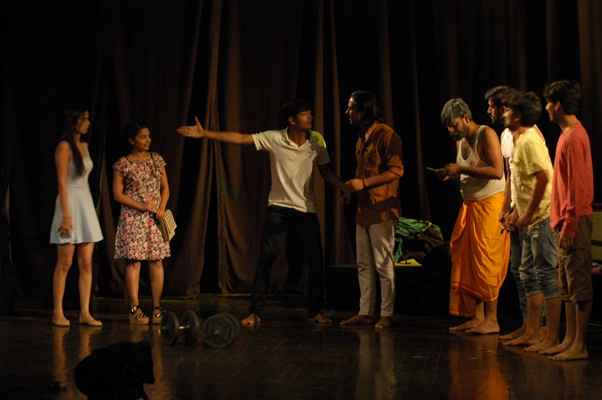 As part of the weekend theatre programme, play titled ‘I’ (मैं) directed by Raghav Tiwari was staged yesterday at the Jawahar Kala Kendra.  It is based on a play ‘Andha Yug’ written by renowned writer Dharamvir Bharti with the settings of the present times.  The plot explores the theme of ego and changing relationships under its power, about how in the end, it leaves one only with regret.

The play begins with a group of men with different professions and interests who live together. They are introduced to a new roommate Kabir, who is a theatre director and intends to prepare a play on “Andha Yug”. He is in search of cast for his play and decides to convince his roommates to act. Eventually, his life turns into the play itself. He meets an egoistic, Namit, who starts to dig a ditch to bring down Kabir. Kabir sees an Ashvatthama within Namit and starts seeing himself as Krishna and then he meets Kaali, the Gandhari of his play. Soon the day of performance comes and things get so intense that the real life of Kabir coincides with Krishna of “Andha Yug” and he loses his life. It is then that everyone realizes that everything has changed. Thus the play ends with a beautiful idea inspired by the thought of Swami Vivekananda, ‘art, science, and spirituality, are the mediums to know the self’.

It is to be noted that the play was also staged at the reputed Kala Art Ghoda Festival in Mumbai.